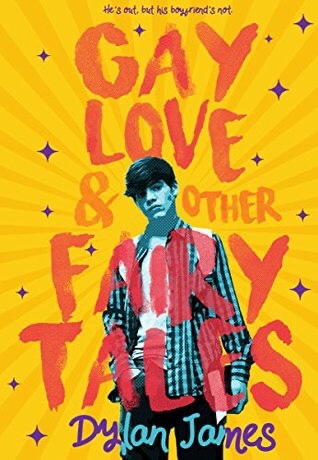 Gay Love and Other Fairy Tales by Dylan James

I don’t dnf books too often because I’m always compelled to finish them. But when I do it’s either because the writing wasn’t my taste or I couldn’t get into the story at that moment because I’m a mood reader.

And while I try not to be too critical with queer stories because I feel bad when they’re held at such a higher standard than allocishete books, I can’t help it when the book makes me uncomfortable.

For other’s, some of the things I mention might not be a problem. We all have different experiences as queer people and I feel the need to list these things because some of it could make other queer people uncomfortable or trigger old memories and I don’t see some of it mentioned in the reviews.

The idea of Gay Love and Other Fairy Tales was nice when described by a few tweets on Twitter and an okay synopsis.

I thought one out gay kid trying to help another, closeted, gay kid become comfortable with who they are over a winter break sounded like a cute but still slightly deep story, and it could be, but not the way this one was written.

To start, I would like to address the unnecessary over use of the F word that rhymes with hag. When people use the word around me, it doesn’t bother or affect me. But reading it and having the tiny voice in my head say it repeatedly within the first few chapters of the book really made me uncomfortable. It was just tossed around too loosely for me.

And while I don’t mind the gay stereotype in stories, because there are actual people who are like that, I do feel the need to put it out there that this book has a lot of gay stereotype stuff going on for those who don’t like to read books with those in them. So if you’re looking for a book that’s not the gay stereotype, this one isn’t it.

I also hate the way they went straight for the over demanding, bitchy for no reason head cheerleader. As an ex-cheerleader, that just pisses me off whenever I read it. I’ve been on three different teams and granted some people get big egos with their skill level and people get jealous, this story just went to the extreme. And I’m not really here for the girl being made out as a villain because she’s dating the other main character (the love interest) and is the cheer captain. At least give her a motive for being a bitch to this main character instead of the fact that they’re co-captain. Because we had co-captains and they didn’t give a damn if they weren’t the only captain. I could see if it was a teen being jealous of another teen and painting her out as a horrible person out of jealousy, but that’s not how it read to me.

And I would also like to address the comment that gets to me in so many queer books. The person saying that someone doesn’t have the right parts he’s looking for in a lover and how she’s missing the necessary dick instead of saying they’re not male. Just say they’re not a dude and move on unless you’re going to go into the discussion about how some people have a certain preference for certain body parts.

which also leads me into the fact that the author is white and writing the struggles of internalized homophobia and not coming out because of a homophobic family of a character that is described as having brown skin. And I don’t know about others, but I feel like that isn’t his story to tell. That it’s such a specific experience he should have left it to someone with that marginalization. (I use the word because we still don’t know his race or ethnicity because the descriptor is not helpful beyond he is not white.)

And finally I have come to the last turn off for me before I decided to dnf, the writing feels repetitive. And sometimes it doesn’t feel consistent. For example, several times the author mentions that the two main characters used to be friends but aren’t anymore despite the fact that they still talk. But he’s not consistent when he says how much they talk. At one point he makes it sound like they don’t talk often and then turns around and makes it sound like they still talk a bunch for people who aren’t friends anymore. But every time the main character mentions speaking to the other main character the author has to repeat that they used to be friends and despite not being friends anymore they still talk, even if the character is just restating it in internal dialogue for the second time instead of saying it to another character.

After that, I dnfed. I did skim through because I was so close to being 50% done and was contemplating holding out, but it did not look like things got better. In fact, I had some problems with the few pages I read scattered at the end, but I don’t want to get into that too much. I do want to mention one part that I skimmed and had to stop to read.

Before I get into that part, I will start with: I do feel like queer books should be allowed to be the shitty 5 star reads where the only thing the book has going for them is the cute or captivating relationship between the main character and the love interest (when the book has romance in it.)

But even then, this book still wouldn’t be it from the page or so I read out of different scene’s at the end. In the one scene I want to mention, the main character said that the other main character was a coward for not coming out to people. Haha, yeah, we’re not going to pressure people to come out for any reason in this house. It’s totally fine to write about a character who says that though, because there are gay people who do, but I leave that here because I am not okay with it and I know some people may be triggered by it or be uncomfortable reading it.

But beyond that one scene, I feel I wouldn’t be bringing the full context to the table to list the other problems I had from the quick skim I did of the rest of the story.

So that’s why I dnfed. And this is one I don’t plan to try and read again in the future.